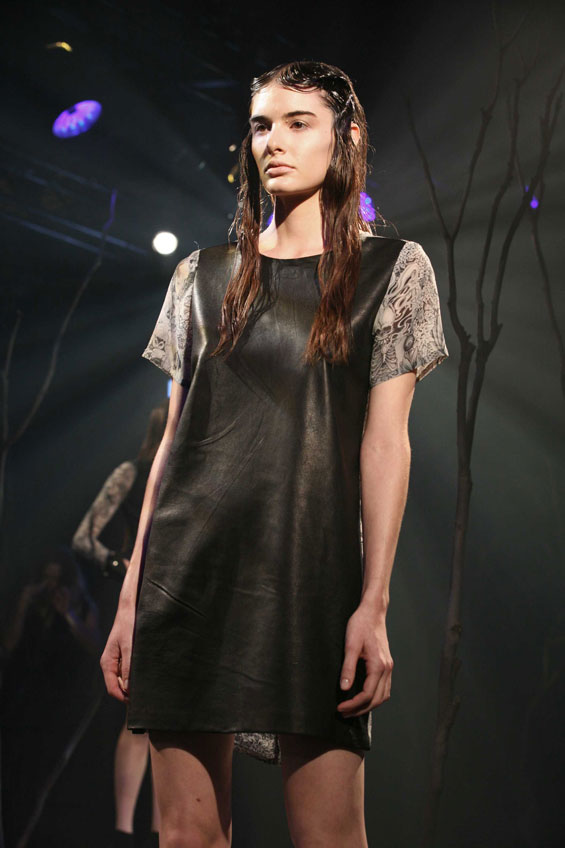 flowers For a VagabOnd presented its Summer 2012/13 collection, ‘Desirable Darkness’ at Mercedes-Benz Fashion Week Australia  yesterday, the 1st of May 2012.

The show was held in the new conceptual venue,’ The Box,’ onsite at the Overseas Passenger Terminal in Sydney’s picturesque Circular Quay.  flowers For a VagabOnd was the fourth designer to show in the ‘blank’ space format, which offers designers the chance to present their collections in a personal and innovative way.

Designer and founder Toby Maclean transformed the space into a dark woodland, with bare twig like trees forming a thick border and spreading out into the middle of the space. The first model emerged from a haze of mist like smoke in a floor length black maxi dress complete with a pleated chiffon train and origami style folds on the body, setting the stage perfectly for the beginning of a conceptual ‘journey’ tale, told through clothes.

‘Desirable Darkness’ represented the story of human travail and triumph.  It was a journey through the depths of darkness, held together by fragile strings of hope until a new era was born.  The tale was told through pronounced graduations of colour and style.

The standout element of the show was the signature ‘tattoo’ style print, which was introduced early in the show and held continuity until the end.  The intricate print, which collaged several different styles of tattoo artwork, was printed onto sheer skin coloured fabric, giving the illusion that the artwork was on the wearer.

Other notable pieces included metallic tassel style skirts and dresses in a multitude of colours, which danced under the lights. Leather contrast panels on sheer fabrics and flowing layers of pleats were also a key element to the collection and something the label has become known for.

To complete the vision models were transformed into sleek nymph like creatures, who blended in with the woodland environment perfectly, by the team of expert hairstylists from Redken 5th Avenue NYC and the makeup artists from MeMeMe Cosmetics.

The motivation for the collection was born from real-life tales that touched designer and founder, Toby Maclean deeply. The tales were told to him by a close friend who works with the most marginalized members of Sydney’s community at The Wayside Chapel, aiming to bring them the hope and optimism that triumphed at the end of the collection.

To cement this motivation within the collection, one of the elements which was subtly worked into the tattoo print was the distinguished tattoo style logo of The Wayside Chapel with the evocative words, ‘love over hate.’

Rather than simply telling their tale though, Maclean decided to make the collection a means with which to assist these people, committing that he will donate five dollars of every garment sold from this collection to The Wayside Chapel.

flowers For a VagabOnd introduced further innovation through digital channels including live instagram previews as the models walked on stage on the labels Facebook page and the use of a QR barcode handed out to guests on the show press release as they entered. The barcode directed guests to an exclusive pre-order store, which will launch at the conclusion of Mercedes-Benz Fashion Week Australia. Using official runway imagery the store will offer guests and Facebook fans who register on the page a real ‘runway to wardrobe’ opportunity with deliveries of their purchases arriving well before Summer stock hits traditional retail stores.

The Summer 2012/13 collection show was a glorious first solo show for flowers For a VagabOnd, after showing in group shows for the last two years. It reflects a new maturity in the label and its design aesthetic and like the story it told, it promises a brilliant future ahead.